This is an overview of the eclectic range of works sung by Vox Holloway since 2009. Concert titles shown as links will take you to more information about the works and performance.

Directed by Harvey Brough, with rehearsals led by Christina Gill.

The amazing true story of the Fisk Jubilee Singers

After our Hackney Empire revival was cancelled due to coronovirus, we decided to celebrate the launch of the CD by streaming our 2019 performance on the day of the concert (March 29), over the Easter weekend (April 10-13) and for two subsequent Sundays.

An imaginative programme of Christmas music, with new arrangements of seasonal favourites, plus audience participation.

Music on the Mind

Click here to to help us record it for posterity

Bossa Nova and Songs of Resistance

With Monica Vasconcelos and her band and Vox Holloway Community Choir

A Concert of Tudor Music

After the rapture of Freedom Song, a moment for quieter contemplation

FREEDOM SONG – When Gospel Came to the Empire by Harvey Brough (music) and Justin Butcher (words).

Performed by Vox Holloway and the Hackney Empire choir

The inspiring true story of the Fisk Jubilee Singers, a group of emancipated slaves who took to the road in 1871 to raise funds for their university and introduced the world to the riches of plantation spirituals.

Sergeant Pepper singalong – open to all

Arrangements made specially for us by David le Page and Harvey Brough. With an afternoon’s expert coaching from Harvey, a  chance to sing alongside the celebrated Vox Holloway, with a professional band led by David, and soloist Jeremy (Wallbanger) Taylor.

Plus: INCANTATION OF EDEN by Harvey Brough, libretto by Justin Butcher

A 50th anniversary celebration of the Kinks’ classic album, in a new arrangement by Harvey Brough, with the blessing of Ray Davies.

An evening of Brazilian Music with singer Monica Vasconcelos.

Songs of resistance from her acclaimed album The Sao-Paulo Tapes, together with Samba and Bossa Nova classics, in new arrangements by Harvey Brough.

World Premiere of a commission by the Cloudesley Charity, celebrating the life and legacy of Richard Cloudesley whose will –  read 500 years ago – continues to provide for the people of Islington.

Oratorio about the life of a radical saint, by Harvey Brough, with libretto by James Runcie

Plus Linguis, by Harvey Brough, with a libretto by Tanis Taylor.

With Young Vox, and the North Bridge House, Canonbury, Choir

• Listen to an excerpt from the recording here

A concert of 18th-century music written for the orphans of London and Venice, featuring Handel’s Foundling Hospital Anthem, Vivaldi’s Gloria and A Particulare Care by Harvey Brough.

Summer  – SUMER IS ICUMEN IN

A sparkling selection of music from Medieval to Gothic to Jazz.

will be accompanied by the 100 plus voices of VOX on original songs and standards(Skylark, Memphis in June and others arranged by Harvey Brough)

A welcome return for our rather fab concert of Christmas music, with special guests and soloists….. 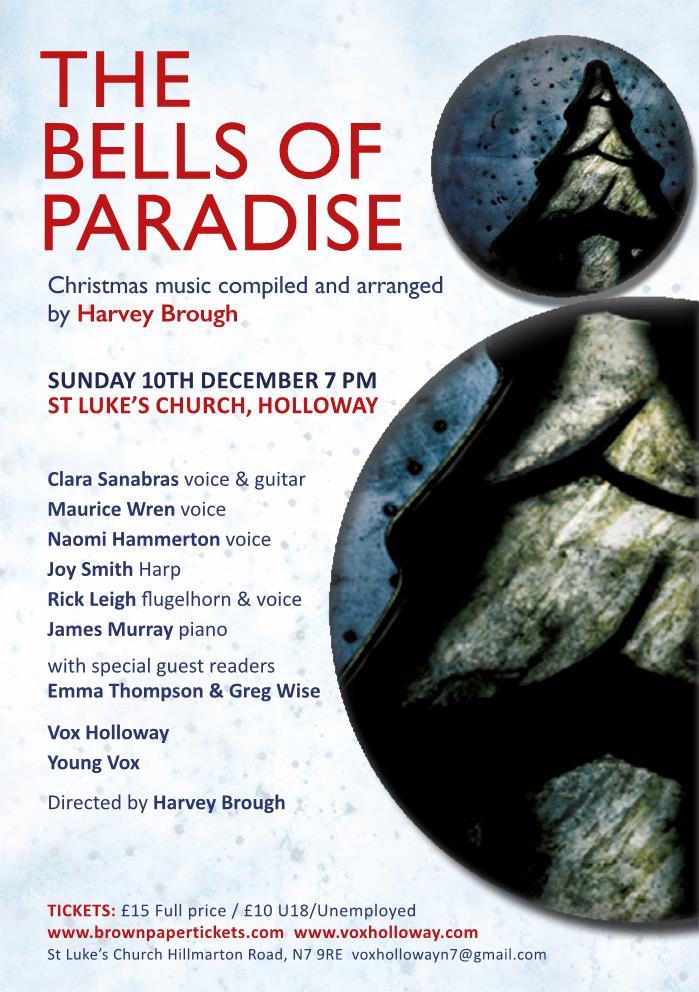 A performance of the entire album, accompanied by the really rather wonderful Harborough Collective and soloist Jeremy Taylor.

Spring – A HUM ABOUT MINE EARS – at the Barbican Centre

Summer – THE YEAR OF JUBILEE

Harvey Brough; The Year of Jubilee, 2016

Christmas Music through the ages and from around the world, 2016

Winter – MUSIC ON THE MIND

Easter – THIS WORLD AND THE NEXT

Winter – AT THE TURNING OF THE YEAR