Posted on November 2, 2011 by voxholloway

Vox Holloway is a dynamic community choir based in North London. We work with professional composers, singers and musicians to commission and perform new work.  See our ambitious 10th anniversary programme here

Posted on January 22, 2020 by Claire Armitstead

In the late 1960s, the Kinks released two albums that countered the optimism of the decade with a bittersweet evocation of what had been lost. 1968’s charismatic Kinks Are the Village Green Preservation Society, was followed in 1969 by Arthur (Or the Decline and Fall of the British Empire), about a carpet-layer forced to emigrate to Australia to find work.

To commemorate the 50th anniversary of these albums Ray Davies has commissioned composer Harvey Brough to rearrange songs from Arthur, to accompany his triumphant choral version of The Village Green Preservation Society, premiered in 2018.

Join us for an evening of Christmas music: some old favourites and some new arrangements by Harvey Brough – and a bit of festive audience participation. 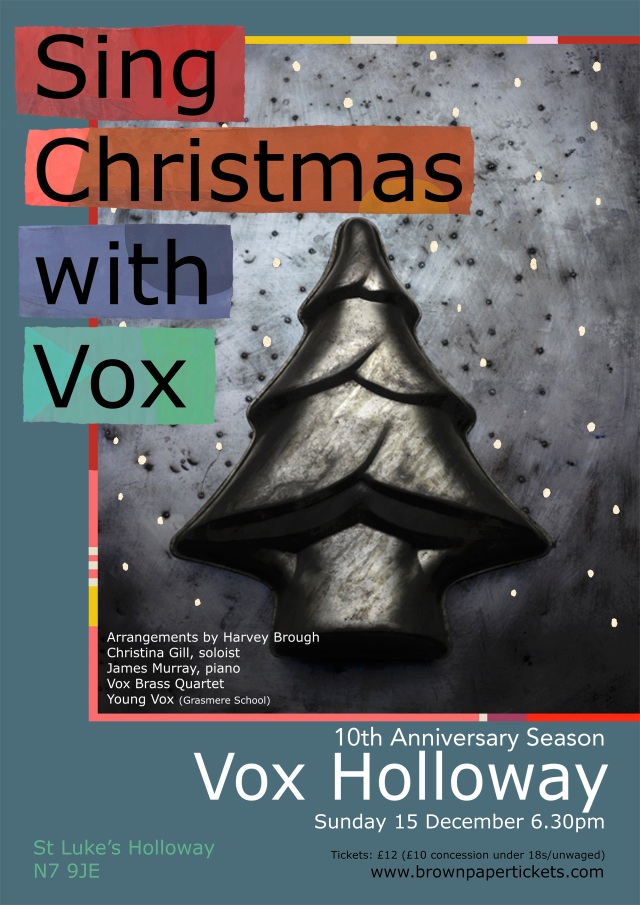 Help us to record Music on the Mind

Posted on November 23, 2019 by Claire Armitstead

Music on the Mind is an meditation of the pain – and the creativity – of mental illness. It is one of the most ambitious projects we have ever undertaken, and also the most important – and after two triumphant live performances, we are determined to record it for posterity.

But recording comes at a cost. So we have set up a Just Giving page to help raise the money. We are already two thirds of the way to our target of £5,000. We would be so grateful for your support.

Tickets are now on sale for the Christmas Concert on 15th December 6.30

There will be festive cheer, wine and singing along!

Music on the Mind Podcast is out!

Maddy and Christina have assembled this wonderful series of talks with Vox people about MotM and what it means to them.