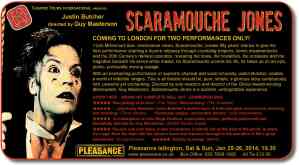 Reviews and insight into the performance:

Extract from A Spectacle Of Dust, autobiography of the late Pete Postlethwaite:

“My appetite for the theatre was increasing and I’d also begun working on a project by Justin Butcher, called Scaramouche Jones. Justin and the director, Rupert Goold, wanted to put it on and sent it to my agent. I adored it and … was certain from the off.

It spanned the hundred years of the twentieth century and had a cast of one: me. I played a hundred-year-old clown on the last night of his life, looking back at his own story, a story that took in numerous adventures across the globe.Scaramouche was an everyman character, a clown by trade. He had an extraordinary capacity for making people laugh and took the sins of the world on his shoulders, despite being an ordinary clown.

Justin’s script was phenomenal in its detail, like a baroque cathedral. I pictured it as a massive oratorio with different notes. Scaramouche had seven white masks that had been accumulated at various points in his life and he wanted to rid himself of them so that he could go naked into death. Each night was emotionally liberating and new; I’ve never been a musician but I imagine if I were to play a piece by Bach I’d interpret the notes in a different way each time I played. That’s how I can best describe it.”

We are the community choir of Holloway, London.
View all posts by voxholloway →
This entry was posted in London and tagged Justin Butcher, Pleasance Theatre, Scaramouche Jones. Bookmark the permalink.
Loading Comments...
%d bloggers like this: