Concert 6th April: This World & The Next

We hope to see you for our Spring Concert on Sunday 6th of April at St. Luke’s. Tickets are available via Eventbrite or can be bought on the door. Doors open at 7pm along with the bar and the performance starts at 7.30pm.

The concert is called This World & The Next, and the theme has been prompted by the impending anniversary of WW1 and by the sense that this world and the next can seem both real and strange. The choir will be singing a new work by Harvey Brough called Incantation of Eden, a kind of cradle-song to a new-born child which embodies the sense of loss and hope brought about by this seeming strangeness. We will also sing Fauré’s Requiem in D Minor which engages with the land of the departed and provides a wellspring of inspiration to the living. Britten’s cantata Rejoice in the Lamb sets Christopher Smart’s paen of praise by all things in existence in the world into a polyphony of astonishing ideas and sound. We return to Fauré at the end of the concert for his Cantique de Jean Racine which evokes the dawn of a new day with rich warmth. 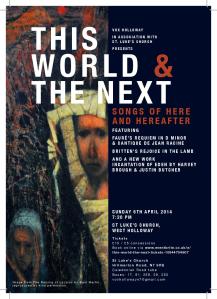 We are the community choir of Holloway, London.
View all posts by voxholloway →
This entry was posted in Choir, Community choir, Concert, London and tagged Fauré, Harvey Brough, Justin Butcher. Bookmark the permalink.