Why the Kinks’ classic album is an oratorio for our times …

Posted on September 8, 2018 by Claire Armitstead 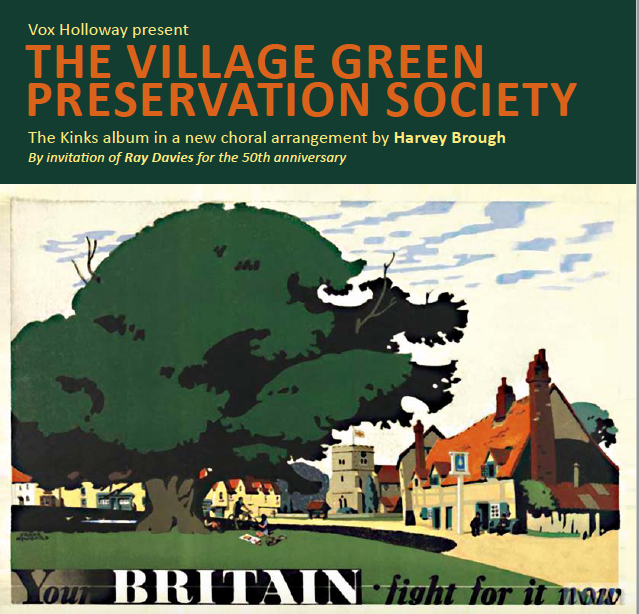 The 120 voices of Vox Holloway are joining together this autumn to salute a musical legend and celebrate a seminal album that has become a huge influence on generations of pop musicians.

Ray Davies and the Kinks have left an indelible mark on the work of artists ranging from David Bowie to Blur and Lily Allen (just for starters).

Their 1968 album, The Village Green Preservation Society, is a unique musical fusion of vaudeville, oompah, music hall, palm court and the blues (an outrageous remodelling of Smokestack Lightnin’) – all bound together by the inimitable Kinksian rock with a tongue in its cheek.

Harvey has taken material from the album and session outtakes to create a modern Oratorio of Englishness, a collection of portraits of eccentricity, sometimes nostalgic or regretful, yet always leavened with wryness and humour.

The resulting choral work has a depth and an immediacy that is rare in the conventional choral repertoire.

“Ray Davies is a composer whose range and versatility rivals, or surpasses, that of many classical composers. He also writes his own words with an insight and gift for truth to which many poets aspire. For me, he is a complete musician and composer, not just a pop artist.”

In the new oratorio we meet characters such as schoolfriend Walter (Do you remember Walter smoking cigarettes behind your garden gate?), Uncle Charlie (a-boozing with his friends in sunny Southend), Wicked Annabella, a temptress twisting minds, a Phenomenal Cat who eats his way around the world and Monica, who’ll do something wrong and prove to you she is right.

Coming at a time when we are questioning what it is to be British and what our relationship with Europe will be in the future,  the album’s 50th anniversary offers a poignant mirror image of the optimism of the late 60’s, when we were contemplating making a move in the opposite direction – joining the Common Market.

The album touches on themes that are more relevant than ever today. Along with friendship, growing up, old age and the passing of time, it deals with conservation, property development, deity, and the importance of connecting with nature.

As a community choir based a few miles from Ray Davies’s north London home, Vox Holloway is perfectly placed to carry his vision into a new era.

WE ARE THE VILLAGE GREEN PRESERVATION SOCIETY
GOD SAVE DONALD DUCK, VAUDEVILLE AND VARIETY