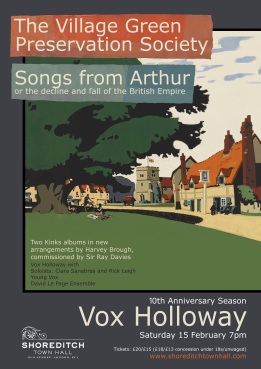 In the late 1960s, the Kinks released two albums that countered the optimism of the decade with a bittersweet evocation of what had been lost. 1968’s charismatic Kinks Are the Village Green Preservation Society, was followed in 1969 by Arthur (Or the Decline and Fall of the British Empire), about a carpet-layer forced to emigrate to Australia to find work.

To commemorate the 50th anniversary of these albums Ray Davies has commissioned composer Harvey Brough to rearrange songs from Arthur, to accompany his triumphant choral version of The Village Green Preservation Society, premiered in 2018.