Celebrating 500 years of support in Islington, Vox Holloway & Cloudesley present the world premiere of The Stony Field A musical fable celebrating the life & legacy of Richard Cloudesley by Harvey Brough & Justin Butcher A magical story of a stony field, a miraculous harvest – and a dream which came true. 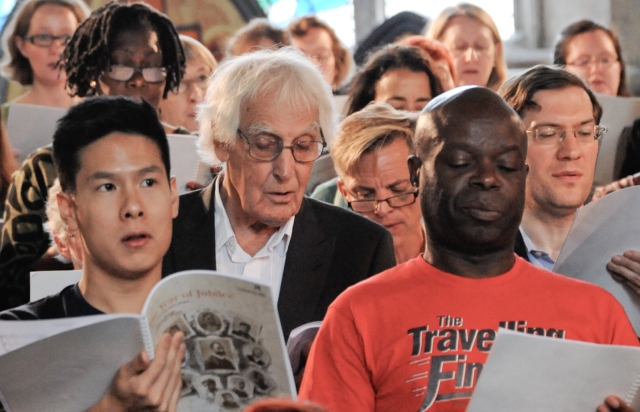 “The most wonderful evening with Vox Holloway. It was magical. You were superb.” David Suchet

And from these stones burgeoning a vision came to birth Of a harvest, miraculous and strange, in my dream … … And in the dawn light, the stony field shone bright with gold.

In 1517, Islington landowner Richard Cloudesley bequeathed a plot of land known as “The Stony Fields” or “The Fourteen Acre” in perpetuity for a variety of social and religious purposes. Fields grazed by cattle in the 16th century today deliver an income which funds annual grants of £900,000 to local residents in need, local charities, community projects and Church of England churches.  And this year, to mark the 500th anniversary of Richard Cloudesley’s bequest, an additional £1.2million of grants are being made.  These include health grants for Islington charities and schools, and an award-winning Sustainable Church Buildings Project to reduce the carbon footprint of local church buildings.

To celebrate the extraordinary fruits of Richard Cloudesley’s bequest, its remarkable survival over the centuries and its continuing impact today, effecting change in the lives of many of the most marginalised communities and individuals in society, acclaimed north London choir Vox Holloway will premiere a magical and inspiring new choral work, THE STONY FIELD, by renowned composer Harvey Brough and award-winning playwright Justin Butcher. Described by its creators as “A musical fable of a stony field, a miraculous harvest – and a dream which came true”, THE STONY FIELD will feature acclaimed soloists Andrew Rupp, Julie Kench, Clara Sanabras and Jo Marshall, alongside some of the UK’s finest Early Music instrumentalists in the Holloway Baroque Players, the junior voices of Elizabeth Garret Anderson School Choir and the 100 voices of Vox Holloway. The concert programme will also include GF Handel’s sublime “Foundling Hospital Anthem” and Harvey Brough’s “A Particulare Care”, a modern-baroque piece inspired by the history of the Thomas Coram Foundling Hospital.

Three premiere performances across Islington in May and June 2018 bring to a thrilling conclusion a 500th anniversary year of cultural celebrations of this remarkable charity, which have included a newly-published history of Cloudesley’s life and legacy, a touring history exhibition, guided walks of the Stony Fields and environs, thanksgiving services and the restoration of Richard Cloudesley’s tomb. The performances will take place at Vox Holloway’s home of St Luke’s, West Holloway, on Sunday 20th May; at the beautiful church of St James Clerkenwell, an 18th-century architectural gem newly incorporated into the Cloudesley bequest, on Thursday 7th June; and at Richard Cloudesley’s own place of worship and final resting place, St Mary Islington, on Saturday 9th June.

The acclaimed composer-librettist duo of Harvey Brough and Justin Butcher have produced many remarkable new works with Vox Holloway since they started the choir in 2009, on themes as diverse as slavery (The Year Of Jubilee, 2013), refugees & conflict (Songs of Exile, 2013) and, most recently, mental health, in their 2015 premiere, Music on the Mind, described by Vox Holloway patron Emma Thompson as “unspeakably moving” and by Stephen Fry as “a simply fantastic project”. Through these and other concerts, Vox Holloway has raised more than £80,000 for charities working in the UK and around the world in famine and disaster relief, children’s rights, rescuing victims of sex trafficking & modern-day slavery, medical provision in war zones including the Syrian War and charities working in mental health care. More recently, Vox Holloway collaborated with the Britten Sinfonia and Chorus of Dissent in the premiere of a new work based on The Tempest by celebrated singer-songwriter Clara Sanabras at the Barbican Shakespeare Weekender Festival in March 2016.

Harvey Brough, composer, performer and conductor, is one of the UK’s most accomplished and diverse musicians, whose compositions have been performed at the Barbican, Royal Opera House, Queen Elizabeth Hall, St John’s Smith Square, Kings Place and the Usher Hall, Edinburgh, and whose music for film, TV and theatre includes compositions and arrangements for Merchant of Venice (starring Al Pacino), Kubrick’s Eyes Wide Shut, BBC TV’s In a Land of Plenty and Her Naked Skin and War Horse at the National Theatre, where he is currently directing the music for Joe Hill-Gibbins’ new production of Rodney Ackland’s Absolute Hell.

Justin Butcher is the award-winning author of Scaramouche Jones, starring Pete Postlethwaite and directed by Rupert Goold, which has been translated and produced all over the world since its premiere in 2001, the hit anti-war satire The Madness of George Dubya (Arts Theatre, 2003), the controversially acclaimed Go To Gaza, Drink The Sea (London & Edinburgh, 2009) and six plays for BBC radio, the most recent of which, The Devil’s Passion, was broadcast on BBC R3 in December 2017, starring David Suchet in the title role. Justin’s account of his 2017 London-Jerusalem pilgrimage in support of Palestinian rights, Walking to Jerusalem, is published by Hodder & Stoughton later this year.

Cloudesley is a permanently endowed charitable trust which makes grants of c. £900,000 per year to people, organisations and churches within the London Borough of Islington.  Its history dates back to 1517 when Tudor yeoman Richard Cloudesley wrote his will and left two ‘Stony Fields’, the income from which was to be used for a variety of religious and charitable purposes.

From July 2017 to June 2018, the charity is celebrating its 500th anniversary. During the anniversary year, an additional £1.2million of funding (on top of the annual grants budget of £900,000) is being given for:

The charity’s income is derived from its ownership of 100 property units on the Cloudesley Estate (the original ‘Stony Fields’) and income from marketable securities.  Up to 15 Trustees are responsible for directing Cloudesley’s activities and the stewardship of its assets. A small staff team is responsible for the management and administration of the charity.  Further details about the charity and its activities can be found at www.cloudesley.org.uk.

‘The Stony Field’ is supported by a grant from Arts Council England’s Grants for the Arts programme.